This is a long list of some of our favorite picture book discoveries from this past summer.

If You Find a Rock by Peggy Christian

This book read like a poem, where each page has the author musing about different kinds of rocks- wishing rocks, skipping rocks, memory rocks. She brings wonder to the world of rocks and its filled with beautiful photographs. This is by far my favorite find of the summer, and one that I’ll be adding to our personal shelves soon.

I picked this one up because I liked the illustration on the cover, but I ended up really liking it. The story is a little whimsical, like the illustrations, and is about the uncorker of ocean bottles who lives on top of a hill. His job is to open and deliver all the messages in bottles that he finds, and he takes his job very seriously. Except that he always wonders what it would be like to receive a message for himself. One day he opens an unaddressed invitation to a party and sets out to find its proper recipient. Please check this one out.

The Dark written by Lemony Snicket, illustrated by Jon Klassen

The dark lives in the same house as Laszlo, but it doesn’t ever visit him and live mostly in the basement. Until his night light burns out. So Laszlo goes on a brave mission to the basement to find another one, and confronts the dark. I LOVE this story for kids who are afraid of the dark.

Joseph Had a little Overcoat by Sims Taback

My favorite part of this book was the illustrations and the little references in them to Jewish life and culture. When Josephs overcoat gets too old and worn he makes it into a jacket, and then he makes his jacket into a vest, and so on. But what happens when all that’s left of the overcoat is a button? 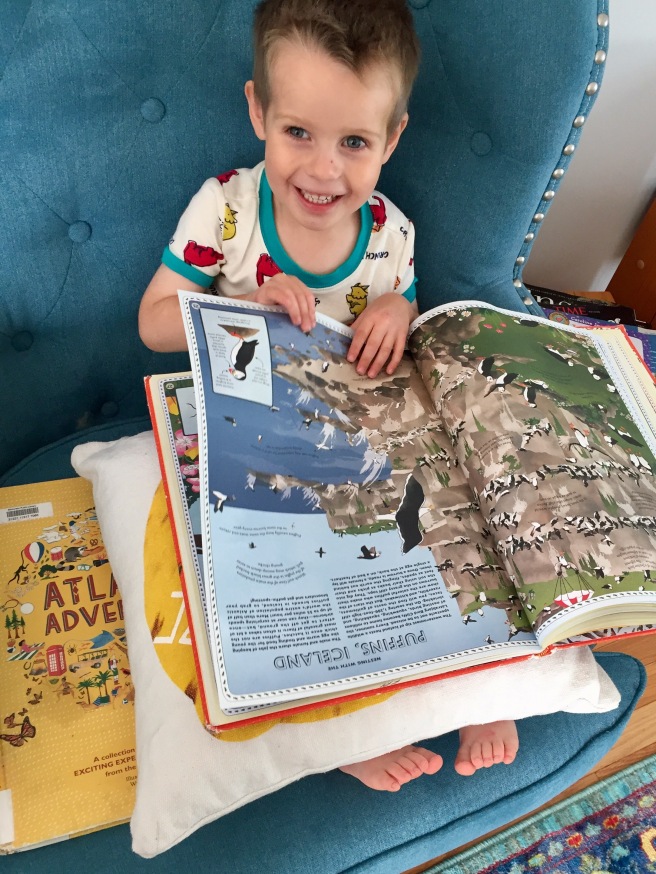 These atlases were filled with fun little illustrations for each country and were so much fun to look at. Wyatt just adored these- he’d take them both to the chair and sit down and flip through each and every page and then start all over again.

Bob gets a pet ghost for his birthday when he’d rather get a puppy. The problem arises when his neglected ghost gets hungry, and things mysteriously start disappearing from Bob’s house.

Best Frints in the Whole Universe by Antoinette Portis

Two alien best frints experience a hurdle in their relationship when one flies and crashes his frint’s new spossip without asking. Fun little twists on words, and Porter loves it so much we’ve taken it out multiple times from the library, although I love it just as much as he does.

A funny story about dust bunnies who love to rhyme. All except for one of them, who is trying to tell his dust bunny friends something that they just don’t get. This one had us all laughing, but especially Porter.

The Carrot Seed by Ruth Krauss illustrated by Corckett Johnson

Wyatt really loved this book, he asked for it every night we had it from the library. He loved repeating after each character, “it wouldn’t come up”, and finally “it came up!” This classic is about a little boy who plants and cares for a carrot seed even when nobody else believes it will come up.

*Not pictured, but books we already own/have been recent aquisitions in the last few months that we’ve been reading include Chicka Chicka Boom Boom and They Very Hungry Catepillar (Wyatt); and anything about volcanoes, his Usborne Encyclopedia, and Where the Wild Things Are (Porter).